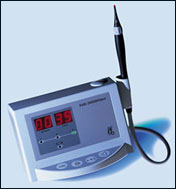 DIAGNODENT
Detecting cavities in their early stages has become more challenging since the utilization of fluoride. Fluoride hardens the outer enamel layer of teeth. When a small cavity has formed in a groove it can grow underneath intact enamel and be difficult to detect in early stages with traditional detection methods. Fortunately a new technology exists to help with cavity detection. Called Diagnodent, it is a tool that sends small pulses of laser light into any suspicious areas of a tooth. If decay is present underneath, a different wavelength of light will shine (fluoresce) back to the machine and it will be detected and measured. Higher readings indicate a higher likelihood that decay is present underneath the surface, and moderate readings can be recorded in the patient's chart for comparison to future readings to watch for changes. Because smaller fillings will likely outlast bigger fillings, it's nice to detect and restore decay in its earliest stages.